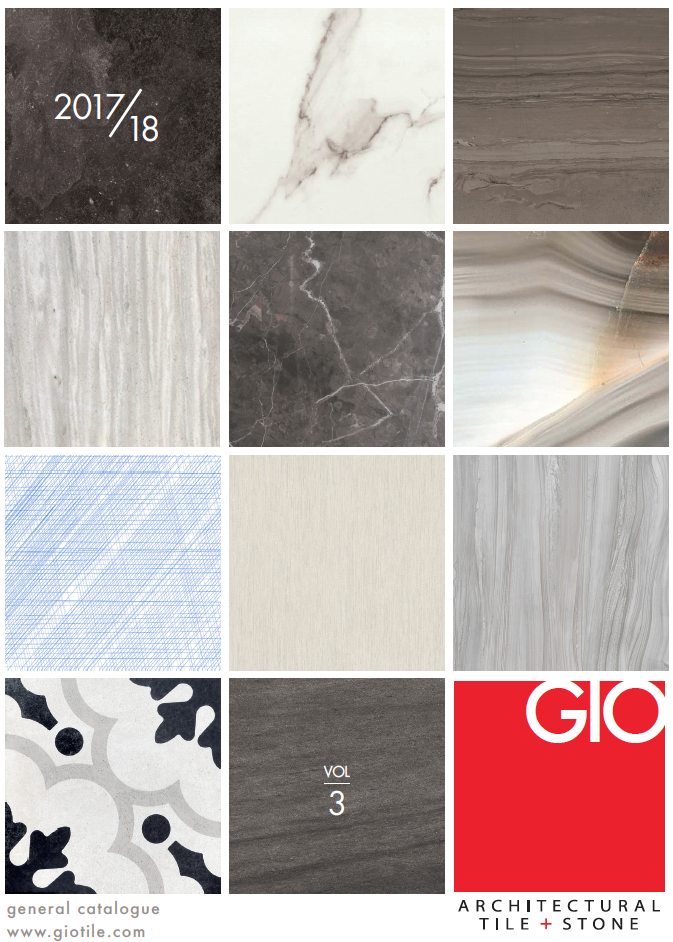 We created GIO, not because the world needed another brand of tile and stone, but because we saw a need in the commercial design arena for better surfacing options, service, and solutions. Our carefully curated selections of tile and stone products are the result of continually monitoring global design trends and technological advances in the tile industry. This means we’re constantly making changes to our product line-up; as things change in the tile industry, so do we! So how can those in the A&D community learn about our products?

Our architectural binders are specifically designed to present our tile collections in a clear and eye-catching fashion. The binders are constructed of strong materials to hold the samples and are a useful and attractive addition to your resource library. Need larger samples? No problem – we also have sample boards and loose samples of individual tiles to help you give your client a “bigger picture.” Whether you want binders, samples, or both, getting them is as simple as picking up the phone or making your sample request by email. We’ll then ship them out immediately or deliver them in person if feasible.

We’re happy to meet with you and your team members! Not only do we love talking tile and showing off our collections, but we also want to hear about your design projects. While we’re always here for you to offer guidance in your technical specifications, your feedback is invaluable to our commitment to knowing what designers really need and want to not only meet – but to exceed client expectations.

Our website is designed for easy navigation, with information presented in a clear and forthright manner so you can quickly identify the looks and technical characteristics you require. The GIO site is also responsive, meaning it automatically changes to fit the device you’re reading it on. Keeping our product offerings current and up-to-date has always been a priority. Any product changes, large or small, are reflected almost immediately so you can depend on our website for accuracy.

The GIO catalog is a comprehensive compilation of  all products lines, a colors index, technical specifications, and tile patterns. It is available for download on our site here, or in our beautiful printed version. The new GIO Tile 2017-18 Catalog is in the works and will be released soon, so be sure to connect with us to receive the new catalog and stay up-to-date with your GIO architectural binders.

Our goal is to be here for you, with the tools and information you need, wherever you may be. Please take this one minute survey to help us understand how you use product resources. Thank you for sharing your insights!

The Brutalist architectural movement flourished from the 1950s to the mid-1970s, and though it is sometimes classified as its own distinctive subtype, Brutalism is considered a variant of post-war modernism. The name is derived from the French word for “raw” in the phrase coined by Le Corbusier (while constructing his Unite d’Habitation in Marseille, France) to describe his choice of material, béton brut (raw concrete).

The Brutalist style is most associated with concrete, but it is meant to describe buildings of the 1950s through the early 1970s that showcase masonry materials in an honest way, reflecting back to history but with a modern interpretation. While the style shares with Modernism the fundamental principle promoted by Louis Sullivan and his successors, that “form forever follows function,” Brutalism was a reaction against early modernism which claimed to honestly express materiality, but was in fact covering each building with plaster and paint.

Brutalism rose to popularity in the 1950s and mostly fell out of favor in the last few decades, though there were sporadic resurgences in South America and the Middle East. The style is controversial, with critics finding it unappealing due to its “cold” appearance and using words such as “hideous”,”inhuman”, and “monstrous” to describe the buildings. Many of the buildings suffered from urban decay due to neglect and materials weathering poorly in certain climates. By the 1980s and 90s the plan in many areas was to knock down the worst offenders.

Today, many people now see the beauty in brutalism. There are blogs, websites, and architectural tours devoted to a re-evaluation of the movement, and buildings once deemed monstrosities are now national treasures. Several Brutalist buildings have been granted historic status, and others have been the subject of conservation campaigns; fortunately, many examples of this fascinating architectural style have survived demolition.

Check out our Pinterest board to see many great examples of Brutalist architecture.

Gio brings  you only the finest commercial grade products, hand-picked from global sources based on our focused knowledge of what you need to to transform commercial spaces. Contact us anytime – we’re here to work with you!

The Bauhaus Movement is an important era in the realms of architecture and design. It derives its name from a design school founded by Walter Gropius in Weimar, Germany and operated between 1919 – 1933.  Prior to the Bauhaus movement, fine arts such as architecture and design were held in higher esteem than craftsmanship. The vision of the movement was to bridge the gap between art and industry by combining crafts and fine arts. Gropius asserted that all crafts, including art, architecture, and geometric design, could be brought together and mass-produced, and he argued that architecture and design should reflect the new period in history (post World War I) and adapt to the era of the machine.

Even though the influences of the movement are clearly architectural, the Bauhaus school did not actually offer classes in architecture until 1927. Instead they explored the style through the use of artistic design and sculptures. They insisted on using only primary colors, very simple geometric shapes, and taught “truth to materials” as a core tenet, which means that any material should be used in its most honest form. These principles led to a distinct ideology of what the Bauhaus Style designs should resemble.

The school closed in the 1930s under pressure from the Nazis, but the movement still influences modernist architecture and design today. While Bauhaus has made its mark on art, industry, and technology, it has also been significantly influential in modern furniture design. Bauhaus bridges the gap between art and industry, design and functionality.

GIO brings you a carefully curated, on-trend selection of tile and stone products developed expressly for your commercial design projects. Each color, size, texture, and detail you see on our website has been hand-picked from global sources based on our laser-focused knowledge of what you need to take your designs not just from good to great—but from great to extraordinary. Contact us anytime  we’re here to work with you!